Energy5 / News / A new variant of the Energy5 photovoltaic tracker 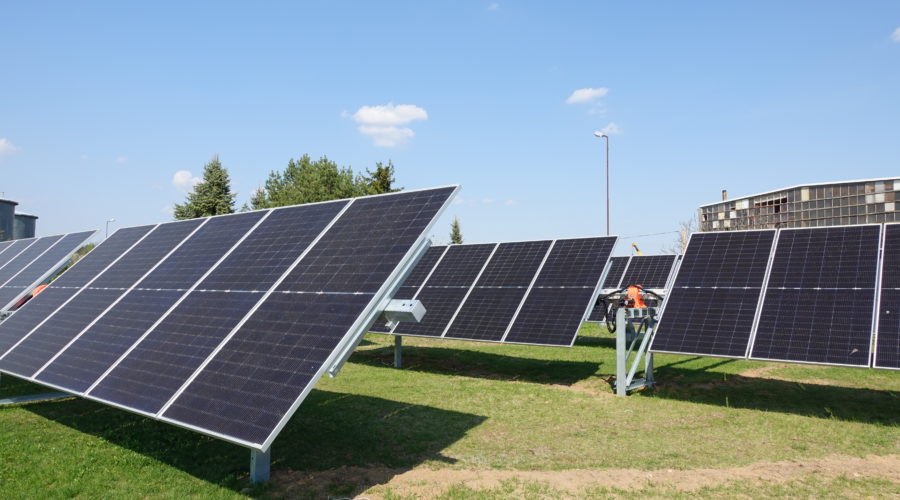 A new variant of the Energy5 photovoltaic tracker

A new, improved variant of the photovoltaic tracker for large-area farms has been added to the Energy5 offer! The new version of the tracker allows the modules to be installed in one row with a maximum length of 98 m.

A single-axis structure allows the system to move in the east-west direction, thanks to which the photovoltaic panels are perpendicular to the direction of solar radiation. The main advantage of this system is the increased efficiency of obtaining solar energy – the yields are higher, on average, up to 30% compared to still free-standing structures.

Thanks to the reduced number of elements and lower  structure, the system is very easy to assemble and optimized both in terms of construction costs and subsequent use.

– We have designed a moving system for large-scale farms, which stands out from the competition. Our activities are supported by long-term design work, numerous tests, as well as tests of the 1:27 scale model, which took place in the wind tunnel. We conducted an extensive analysis of components and requirements related to climatic loads, thanks to which we selected the best components and functionalities. All this contributed to the creation of an exceptionally attractive solution – both in terms of durability and simplicity of assembly and use. Energy5’s tracker is distinguished by a small number of components, which ensures an attractive cost of building such a large-scale installation – emphasizes Cezary Rutkowski, Technical Director of Energy5.

and coastal areas with moderate salinity, as well as in areas with high humidity and aggressive atmosphere. Energy5’s solar structures are made of carbon steel covered with a metallic coating or of galvanized steel.

The customer can choose to control the tracker:

The system is controlled by the astronomical clock, while the security of the system is ensured by intelligent sensors and a weather station that measures the strength and direction of the wind. After exceeding the critical values, the system forces the automatic positioning of the panels in the preferred safe position.

The Energy5’s tracking system is also equipped with snow and rain sensors. When heavy precipitation is detected, the trackers go into automatic snow removal / panel cleaning and position the structures at an angle that allows snow to slide off or clean the structure.

The photovoltaic tracker is equipped with the 3D Backtracking algorithm, which calculates the angle of inclination of the panels to prevent shading of the next rows of modules. The function allows the panels to be rotated to a position in which the shadow cast is shorter and avoids the next row, which guarantees the highest efficiency of the system following the sun.

An application that monitors the work of the tracker is an additional functionality. It allows customers to get a complete picture of the variables found in trackers. The system sends alarms and alerts to e-mail, thanks to which it is possible to control data such as: